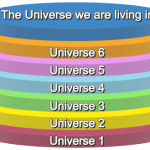 New evidence from the BICEP2 lab in Antartica, after nine years of careful research, shows the existence gravitational waves produced in the first few moments, trillionths of a second, after the Big Bang. Some scientists also believe that this evidence supports the idea of the Multiverse, as inflationary forces would still be creating new universes right now. Read more here.

Scientific support of the idea of the Multiverse also bolsters the idea that some phenomena like remote viewing, extraterrestrial encounters, and unidentified aerial phenomena are evidence of our interaction with the Multiverse in the form of parallel realities. This Multiverse is thought to take the shape of a fractal too.

Learn more about tapping into the potential of the Multiverse with the Human Fusion class taught by Dr. Hein. In this course, I’ll show you how to “optimize” your future possibilities by connecting with your “parallel selves” to helpful and useful feedback for yourself right now.

Here is the Wikipedia article on Eternal Inflation which explains these ideas in a concise way.

“Within the framework of established knowledge of physics and cosmology, our universe could be one of many in a super-universe or multiverse. Linde (1990, 1994) has proposed that a background space-time “foam” empty of matter and radiation will experience local quantum fluctuations in curvature, forming many bubbles of false vacuum that individually inflate into mini-universes with random characteristics. Each universe within the multiverse can have a different set of constants and physical laws. Some might have life of a form different from ours; others might have no life at all or something even more complex or so different that we cannot even imagine it. Obviously we are in one of those universes with life.” —Victor J. Stenger