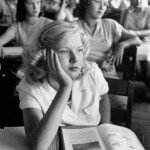 Is mind wandering good for you? It appears now that daydreaming has many positive functions in relationship to our creativity. People who daydream can solve many types of problems faster than people who are more focused. Recent research about a mysterious region of the brain known as the “default network”, shows that it’s most active when we’re daydreaming or unfocused.  It is essential to sorting through memories and possibly one source of our creativity.

But it’s not just that these parts of the brain are active only while the so-called focused executive brain, the dorsolateral prefrontal cortex, is not.  Rather these two parts of our brain work in tandem while we are daydreaming, possibly so you remain aware of good ideas that surface while daydreaming. So one part of our brain is daydreaming while another part keeps track about what we’re daydreaming about! This may be the essence of strong creativity. (From New Scientist Magazine, June 16, 2012)

I found it especially interesting that people who are slightly inebriated, on alcohol in this case, were more creative and solved word problems faster than sober people.

If your interested in training your own “daydreaming ability” you might like the Virtual Viewing Master Class where I show you how to activate and fine-tune this part of your mind. And now you can take a test run to see if it’s for you or not. Learn more