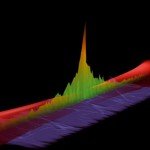 New research in the mathematics of randomness gives more support for  the idea that universe is based on fundamental underlying patterns of order. One type of research looking at random matrix networks shows that even completely random patterns give rise to coherent waves, called “open channels,” that can pass through opaque surfaces more than would be expected from randomized light.

Another outcome of this research is that it can be shown even completely randomized data sets give rise to statistical correlations. This is known as the “curse of dimensionality.” It seems to particularly affect economics by creating the illusion of patterns in long-range historical data.

The larger implication of this research is that even quantum structures can be approximated very accurately with random numbers suggesting that there are deep, underlying patterns in nature that are hidden from view. See New Scientist, 10 April 2010.

Another similar type of research recently mentioned in the magazine Science suggests a related idea. Randomly arranged networks of materials seem to be able to create organized patterns of energy called “Anderson-localizations.”  Even the highly disordered materials create coherent photon waves including infinite-range correlations. The authors refer to this phenomena as a type of “engineered disorder.” These phenomena suggest that spontaneous ordered energy systems are the norm in our universe, rather than the exception. See Science, 12 March 2010.

This research, taken together, provides more evidence for the type of phenomena we continue to see around crop circles and remote viewing: spontaneously organized information arising out of seemingly random patterns.