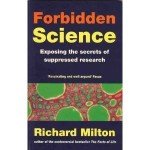 I’m currently re-reading this excellent book, Forbidden Science, by Richard Milton who looks at the hostility of mainstream, institutionalized science to new inventions and technologies. We’re not talking about anything far out by today’s standards but everything from lightbulbs to airplanes were ridiculed or denounced at one time. The Wright Brothers, Thomas Edison, Nikola Telsa (created alternating current) and the inventors of radio and television were all, at one point or another, considered frauds in their time. To put it simply, almost every modern technology we have around was at one time resisted, suppressed, or banned by mainstream science. The Wright Brothers were considered a hoax by Scientific American magazine up to two years after their public demonstrations of manned flight in Ohio. The book is filled with countless similar examples including the humorous case of the French Academy of Sciences once confiscating all meteorites in France on the grounds that they were an impossibility. And let’s not look at what astonomers and other experts said about the possibility of manned spaceflight, even into the era of the first Saturn V rocket carrying astronauts to the Moon in 1960’s. As Dr. Lee DeForrest, inventor of the vacuum tube is reported to have said of space travel in 1957: “I am bold enough to state that, no matter what the discoveries of the future, it will never happen.”  Available here.